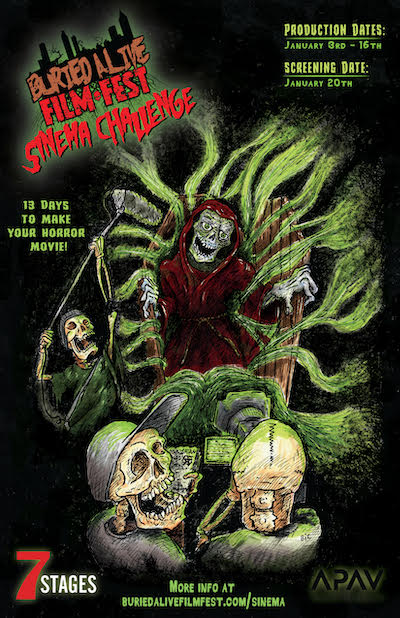 Read the full details below and send any questions to buriedalivefilmfest@gmail.com.

REMINDER: CONTEST ONLY HAS ROOM FOR 12 ENTRIES AND IS FILLING UP SO ACT FAST!

The Buried Alive Sinema Challenge was developed as a fun motivational film making competition for local artists. We understand how hard it is to complete a film in a single weekend… especially a horror film, an animation, or any kind of film that requires a little more special fx or technical love. So we wanna give you THIRTEEN DAYS! Why 13? Because its spooky that’s why… and we wanna see what you really got! No excuses of running out of time. Give it your best, call up your friends, borrow some equipment, find a weird location, get some local band involved and make something we’ve never seen before and most of all, have fun doing it! But wait there is a catch… to ensure that your film was created for our festival we have random horror subgenres you draw from and an obscure subject to work with. No mater what the outcome of your film is, it will be screened as the opening film block of the 2022 annual Buried Alive Film Fest!

How does it work?

Applications must be submitted online prior to the evening of the drawing (January 3rd). Spaces are limited.

Each team will draw TWO horror subgenres cards from a bin. (1 can be returned or genres can be combined)

The subject card can be a person place or thing and can be used in a variety of ways but must be noticeable. Whether it be a character, a prop, a location, or a line of dialogue. Can not be used in credits.

Remember your adherence to the genre and use of subject are included in the judging criteria.

Feel free to hang out, share ideas with your team or other filmmakers, have a few drinks and ask any questions you may have. You have 13 days to make this movie starting on January 4th, 2022 and due by 7:00 pm January 16th, 2022.

RULES, REGULATIONS, & SHIT YOU NEED TO DO

Be prepared and have the right paperwork.

All creative work must be done during the official filmmaking period; however, you can get some of the tedious paperwork done ahead of time. And we’ve got all of the forms that you need.

The entrant must submit a Certification Statement after his/her completed entry is uploaded on Vimeo, certifying adherence to all Official Rules.

It is recommended that you have your talent sign releases ahead of time – then you don’t have to worry with it during crunch time.

Note: This form helps protect you and your group as well as the Buried Alive Film Festival.

Seek out local musicians, bands & composers that may be willing to let you use their work in your film because it creates additional exposure for their talents. Give them credit in the film in exchange for the use of their music.

You may use music or materials that fall under the Creative Commons Attribution License.

Note: Please do not use Creative Commons licenses that are either Non-Commercial or Sharealike as they are incompatible with our festival.

Permits are not required for submission to the BAFF. Contact your local film commission in advance for information about filming in your area. There is nothing wrong with scouting and securing locations in advance.

The only work that can be done before your team has received their genre and subject is organizing your cast and crew and securing equipment and locations.

All footage must be shot within the Official Time Period of the project. Stock footage is only accepted for background images such as television, computer monitor or if used in a visual effect for an artistic purpose.

Also allowable is the use of stock chromakeyed backgrounds, fire, explosions, gunshots, etc. All stock footage must be obtained legally and you must have permission of use.

Please be safe! And keep repeating It’s Only a Movie! No shot in a 6 minute film is worth getting an actor hurt or damaging a location (without permission) or ruining your equipment. Safety first. Have a safety meeting and discuss with you cast and crew every day what all will be taking place. If attempting to do Makeup Fx on an actor with a professional or amateur artist please be safe and check for any allergies to materials used.

Before the finished film begins, the media should have the following:

Your film follows this.

After the 2 seconds of black, some films start with opening credits. These are not encouraged, but if you use them, opening credits are considered to be part of the film, and therefore count against the six minute maximum. Additionally, if your film has opening credits other than simply the film’s title (for example, the names of directors, actors, etc.), you must include one of the following:

Note: “a BAFF Sinema Challenge” may be entirely lowercase if you choose (“a baff sinema challenge”).

Credits at the end of each film are limited to a maximum of 30 seconds. The 30 seconds is considered included in the length of the film, as stated above.

The end credits must include the words: “This film was made for the 2022 BAFF Sinema Challenge”

Slates and Credits After the Competition

For any future screenings, online or otherwise, films should retain the pre-film title card that says:

“This film was made for the 2022 BAFF Sinema Challenge. www.buriedalivefilmfest.com”

STEP 2: Send your film to buriedalivefiledrop@gmail.com.

We accept deliveries via download-enabled Vimeo, Google Drive, and WeTransfer!

IMPORTANT: DO NOT wait until the last minute to decide on how you’ll submit (account for internet speed and upload time!). Entries are due BEFORE 7:00 pm on January 16th, 2022. Anything received after will NOT be used for exhibition, so please ensure the film is delivered to that inbox on time.

We recommend that you make sound levels relatively even throughout your film. (If your film has uneven sound or sound that peaks, it may be modified to protect the playback equipment.)

Be weary of making your film too dark. As projection specs my vary.

All films received on the evening of the deadline (on-time and late) will be screened, presuming they meet the eligibility requirements.

Each team leader must secure releases for talent, music, and locations (and any other applicable needed releases), if a BAFF staff member requests a release form and the project leader cannot produce said release. BAFF reserves the right to remove the film from the contest with no application refund and a revocation of all passes.

To be eligible for the project, entries must be the original work of the Entrant; must not infringe third-party’s rights; may not invade privacy or other rights of any person, company or entity; may not in any other way violate applicable laws and regulations; and may not contain any copyrighted elements (other than as owned by the Entrant and/or BAFF Sinema Challenge).

Entries containing prohibited or inappropriate content as determined by the BAFF staff, in its sole discretion, to be inappropriate will be disqualified. BAFF reserves the right to make the final determination as to which Entries are eligible. BAFF also reserves the right to refuse to screen a film or to make an announcement at the screening regarding the content of the film.

The Entrant should not screen the film before the screening at the BAFF Sinema Challenge screening event. Not online or in a public space. You are encouraged to make a trailer and spread the word if you so wish to do so.

No Entries (media or documents) will be returned.

The Buried Alive Film Festival and its parent company Gorehound Productions reserves its rights to screen the film at the festival as well as any Festival presentations, programs, advertisements and/or related events without notifying the team. However we will always do our best to make contact with the team if said situation should happen.